We are all aware of the fundamental needs of human survival – food, water and shelter.  These are the basic elements that allow us to stay alive both in the wild and in modern day life – they are fundamental to the living process for humans.  I am wondering, though, what other needs reside directly outside the circumference of this ‘basic’ realm?  Perhaps they are different for many of us. These other “second order needs” may differ from person to person, but they are important and need to be honored. Some may need a sense of belonging, or feelings of pride and dignity.  Others might need to set aside quiet, uninterrupted time everyday, or integrate specific elements into the day that provide a sense of peace and purpose.  It may be that people need movement of one kind or another, or need to be with others, or alone. Some need to eat a specific comfort food every week (or everyday) because of the feeling of safety and structure or even well-being that it gives them. Maybe your chosen field of work is a need in your life – and committing to this choice is crucial for you.  Our individual needs will very, but to honor them, seems very important. I recently had the opportunity to participate in a truly remarkable event that brought into focus the web of needs we humans live with.  Further, and perhaps more importantly, it planted within me a very important question. . . . .‘If not me, then who?”

In 2007,  after her son was killed in his second tour of duty, the mother of 1st Lt. Travis Manion founded the Travis Manion Foundation to assist the nations’ veterans and the families of the fallen.   This program has continued to raise awareness of the need for community support on the part of veterans, service members and their families, and also to provide ways in which communities can actually participate in this giving and educating process through outstanding local events.  The foundation’s capstone fundraising event is the 9/11 Heroes Run that ‘Honors the fallen by challenging the living’.  This is a 5K race/walk first held seven years ago in Doylestown, PA that has quickly blossomed into a nationwide happening.

What captivated me most when I entered the grounds of this event was the unmistakable outpouring of community support for this organization and its participants, and the range of personal reasons driving people’s interest in the run and In charitable giving.  Some had become involved to honor specific people in their lives who had been killed in action.  There were entire sports teams, groups of young friends, and families. 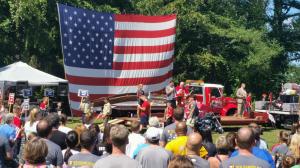 I arrived three hours before the race and had the chance to see the powerful opening ceremonies for 9/11 remembrance, beautifully choreographed ballet performances, and talks given by family members of Travis Manion, community officials, and Chris Kaag, the founder of the IMABLE Foundation.  It is an event that is open to everybody. The foundation’s volunteers were welcoming runners and walkers from every background imaginable, all sharing space in the ceremonies held before the race began.  If you wanted to come and cheer people on, that was fantastic, groups for walkers, runners, adaptable sports groups, children, you name it – they showed up that day.  A sense of joy, pride, purpose and empowerment filled the air. The connectedness we all shared on that day was palpable. It quickly became clear that something was going on here that was much larger than I could imagine.  The race, what was considered the pinnacle event, seemed to be but a small puzzle piece OF the ‘big picture’ purpose that was taking shape.

When walking back to the parking lot that day, I started to process everything I had witnessed and been a part of for the previous four hours.  This event had delivered on levels that were unimaginable.  Not only had it provided support for families of veterans and service members themselves, but it had simultaneously served some of the intrinsic needs of human beings.  For one, it had brought people together, uniting them in a common purpose for a very important cause- while at the same time fulfilling their own need to be a part of something. I have found in my work that people (and the human mind) desire a task.  We want to be part of something.  This event had created a joyous space for people to come together and celebrate the act of serving something outside of ourselves.  The actual race had provided participants with yet another almost basic human need: the need for movement.  It had brought people outdoors in a space where we all interacted in a physical capacity – regardless of physical ability! Physical connection could include breathing, or the intentional movement of any human body within its own range.  I saw expressive, empowered movement in all participants regardless of their physical range; virtual participants were able to connect to the event by internet if they were unable to attend.   Everyone can be part of this inspiring and inspired scene.  The Travis Manion Foundation surely lives up to its slogan “Honor the fallen, by challenging the living”, one that can be associated with many of life’s challenges.

Travis’s last words to his family, before leaving for his second deployment, posed a question: “If not me, then who?”  Travis seems to have been living his life in the most intensely authentic way humanly possible.  He had a deep and profound understanding of his duty, his responsibility – almost as if he had known that his choice to return to active duty would serve a bigger end than he could have imagined.  Had Travis not lived his life as TRAVIS – had he instead made his decisions based on what others wanted him to do – he would not have begun a movement that now honors his life by serving thousands and perhaps millions more.  Travis is an inspiration to every individual who seeks a path in life that honors their own needs.  And as we focus our intention on living more fully and pursuing our needs, we can find strength in pondering the question Travis asked: “If not me, then who?”